The truth about the Ankh

Do you know the answer to life, the universe, and everything? If you do, you’re probably not reading this article. The truth is that we don’t know what the ankh represents.

Yes, that’s right - there is no consensus on what the ankh means just like there is no way to know for certain why ancient Egyptians chose to depict it in their artifacts. In fact, there are several theories about the meaning of the ankh. As much as these facts may annoy some people, it’s always good to be aware of other viewpoints before making claims or taking a stand on a topic.

The same goes for avoiding blind acceptance of ideas based solely on hearsay and popular opinion. So while we can’t give you definitive answers as to what the ankh means or why it was used in Egyptian culture throughout their long history, here are some facts that might surprise you if you were unaware of them.

The Ankh is a symbol of eternity

The Ankh is one of the oldest symbols known to man. It’s been used since the dawn of time, long before humans even began to think about writing down their history.

That’s why it appears so frequently in ancient Egyptian art and culture. And it’s also why the ankh has been used to represent eternity since its inception.

In fact, the Ancient Egyptians believed that even though time is cyclical and life is short, it’s still possible for something eternal to happen within the span of our lives.

That translates into a belief in immortality and eternal life. This idea was demonstrated by everything we see around us:

The Ankh was a symbol of eternity and immortality. It represented the idea that there is more to life than just the physical body, but that it is also possible for something eternal to happen within the span of our lives.

The Ankh symbol was often used as a representation of life, fertility, and rebirth - all things that were associated with the sun god Ra and his cult.

In ancient Egypt’s religion, Ra was considered to be the sun god who brought light into the world, which is why Ra’s cult was so popular. The Ankh represents this same idea: light from Ra brings life and rebirth into this world, just as he brings light into our lives when we look up at him each morning. 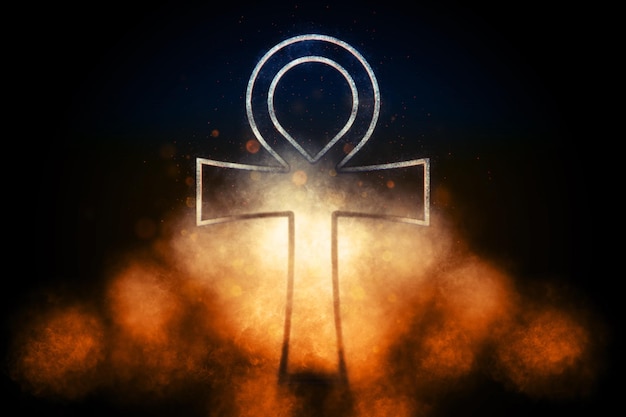 History of the Symbol

We can find a depiction of an Ankh came in a relief at Deir el-Bahri on the west bank of the Nile River in Egypt. The relief was created around the time of King Tutankhamun’s death (1341 BCE) and it depicts the king holding a staff in his hand. The Ankh is depicted as a serpent wrapped around the staff, which represents life itself.

Egyptian art still used the Ankh symbol during the Ptolemaic Dynasty (323-30 BCE), when Egypt was ruled by a Greek Pharaoh named Cleopatra . Cleopatra would later become one of history's most powerful rulers, even being married to Julius Caesar, who ended up becoming Rome's first Emperor.

The Ankh is a Symbol of Life Flow

The ankh has a long history of use as a symbol of life. It’s also been used to represent death, which is why it was often depicted on tomb walls as a funerary symbol. But there’s more to the ankh than that, and its meaning has changed over time. It’s most commonly associated with resurrection, but it also means rebirth and renewal in other contexts.

For instance, the ankh was used in Christian symbolism to represent the Virgin Mary – which is why some people believe that the ankh represents Mary.

It also means rebirth in ancient Egyptian mythology and is said to be a representation of Osiris (the god of the afterlife), who was believed to be resurrected after his death. In other words, the ankh represents rebirth – not just for Osiris but for everyone who ever lived or will live again.

It might be said that rebirth for all Egyptians meant resurrection for their king – which is why every pharaoh’s name was written on ankh seals (Osiris).

There are several theories about what this means:

one is that the ankh symbolizes immortality, which is why the Egyptians believed it would bring life after death.

in addition to these meanings, there are several symbols found within ancient Egyptian culture that are connected with any number of different themes.

We’ve discussed some interesting facts about the ankh, including the ankh’s meaning and origin, but we still don’t know what the ankh means or why it was used in ancient Egyptian culture. It’s important to keep these facts in mind as we continue to explore the ankh’s history and symbolism.

Used as a symbol of life, rebirth, or resurrection, the ankh is a powerful image. It’s appropriate for any kind of celebration or ceremony – whether it’s a funeral service or a wedding reception. You can use your ankh to help make your message clear to everyone you meet: “I love you with all my heart” is just one way you can use this powerful image.